R and Python are the two leading languages used in industry and academia for data analysis. Thus, to best prepare students in the University of British Columbia’s course-based, professional Master of Data Science (MDS) program to be competitive and perform on the job market, we have made an explicit decision to teach both languages.

Students are concurrently introduced to R and Python in the first month of MDS, and they work in both languages for all 8 months of their coursework. In some courses, students learn the same skills in both languages (e.g., general programming, data wrangling, visualization, software development and packaging) and in other courses we specialize in one language in order to go more deeply into that topic (e.g., statistical inference in R, and machine learning in Python). In the 2-month Capstone project at the end of the program, students work with a partner from industry, government or not-for-profit. At the start of the project, the students and partner agree on which programming language will be used. This decision is sometimes based on what best suits the project, and other times is chosen based on what the Capstone partner’s organization already uses. Other times the projects involve a mix of both languages.

Below is a breakdown of how these languages are distributed across the program: 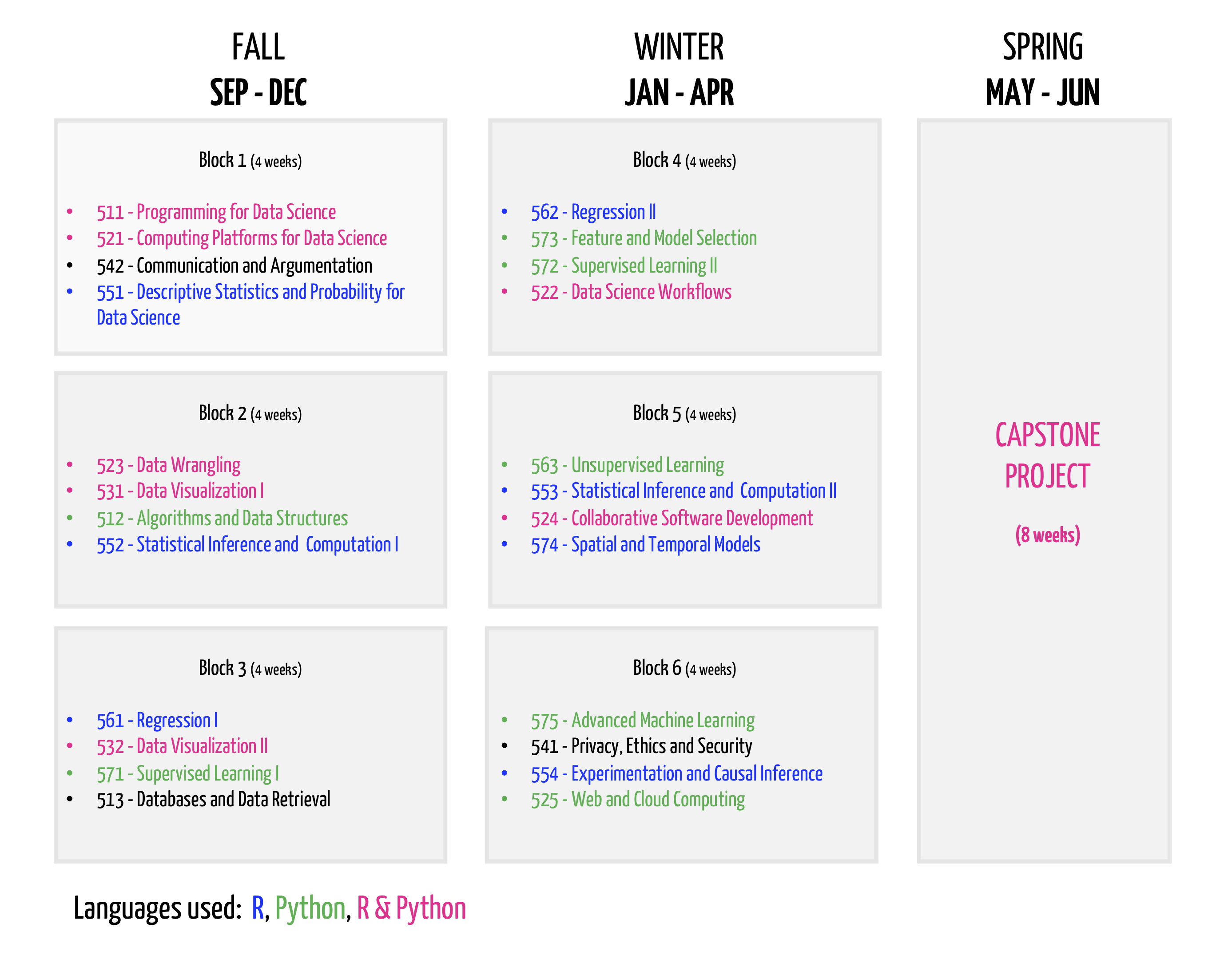 Figure 1. Distribution of the R and Python programming languages across the University of British Columbia’s Master of Data Science program courses.

We have spent a significant amount of time considering which tools to teach to enable students to work harmoniously in both R & Python, as well as how to blend these languages within a data science project. Below we list the tools that we teach in the program for working in both R & Python, as well as some we specifically use for blending between the two languages within a single project:

Examples of how we use and teach these tools

In the first month of the program, students are taught to how to program in both R & Python concurrently. To reduce excessive and unnecessary cognitive load we choose to teach both of these programming languages using the same simple code editor: Jupyter. (This choice also allows us to easily use automated feedback and grading on coding assignments - more on this later.) This lets students quickly learn one simple editor, allowing them to then focus their efforts on learning the two programming languages. 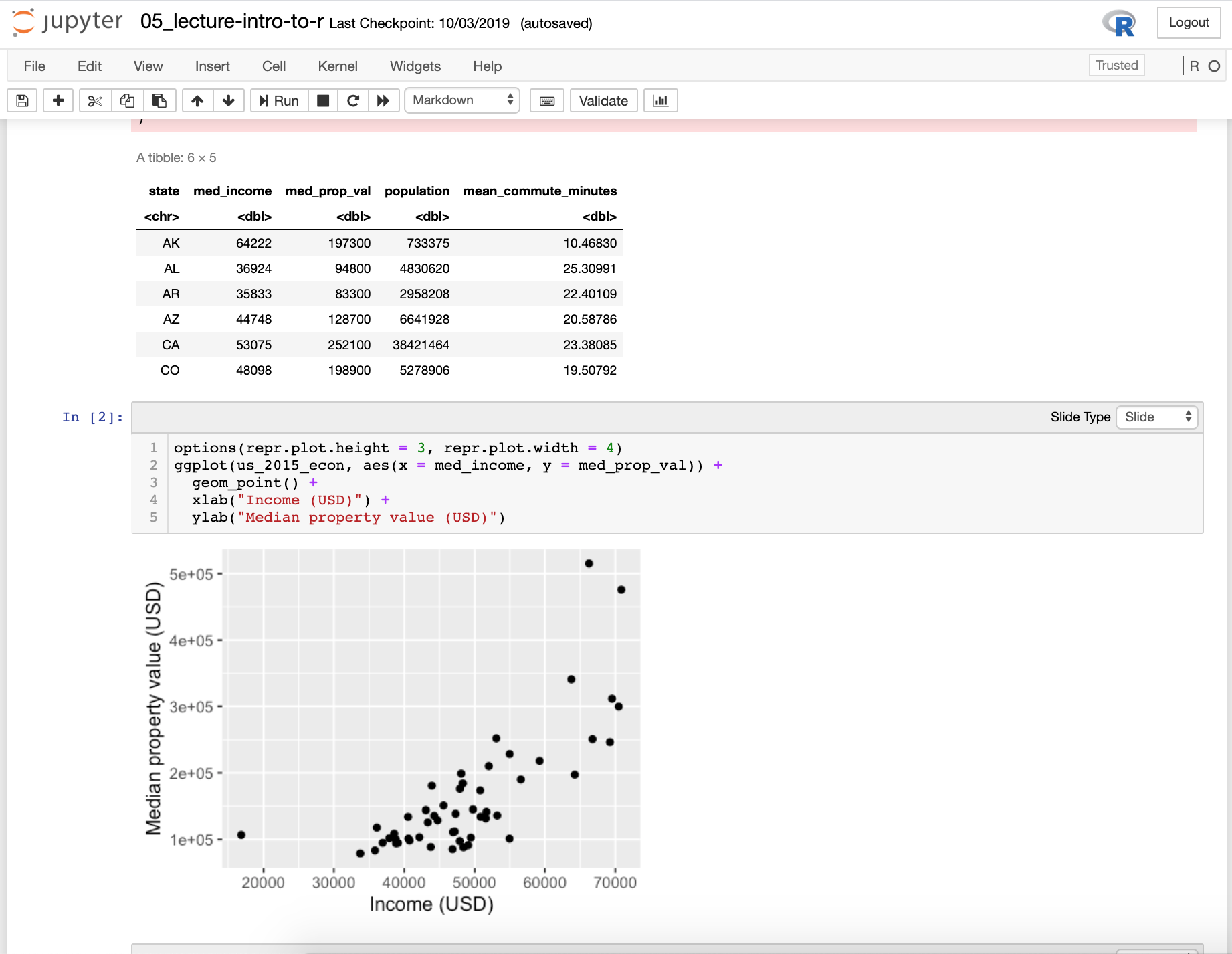 Figure 2. Example of using a Jupyter notebook as lecture notes to teach programming in R for Data Science.

Near the end of the first month in the program, we next start moving the students into a more powerful editor: RStudio. We first have them use RStudio to edit, create and run literate coding documents using R and R Markdown. Then, a month or so later in our Data Science Workflows course, we teach them to use RStudio to develop and run R scripts, Python scripts, and R Markdown documents that use Python as the coding engine. We continue teaching R and Python programming with the RStudio IDE in our Collaborative Software Development course, where they learn to package R & Python code into packages. Having one powerful IDE that can be used for both languages is very nice and efficient for the students as they only need to learn the ins and outs of one IDE and they can then do most of their data science things from one place. 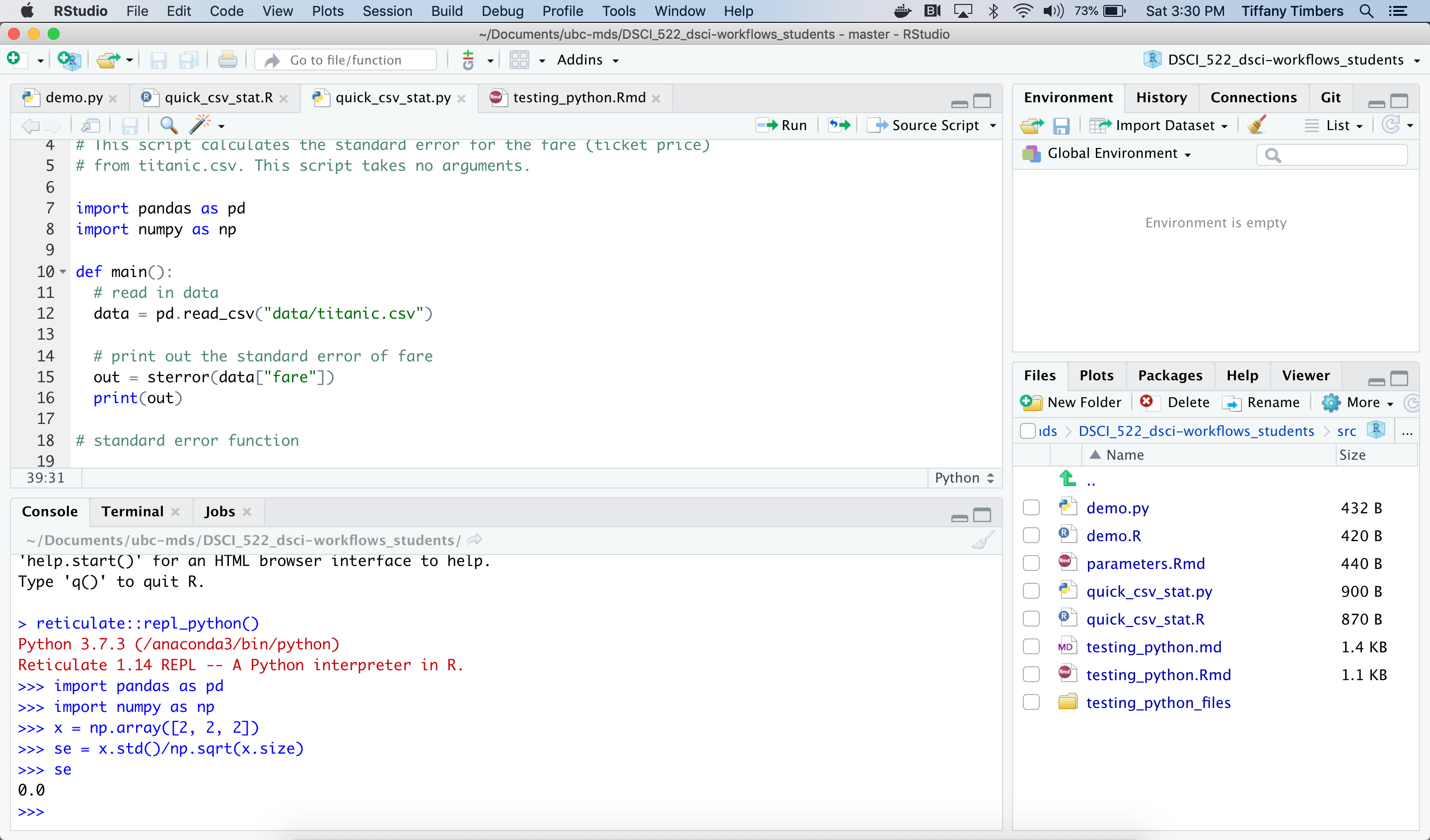 Figure 3. Example of using RStudio as an IDE to develop and run a Python script.

When we teach students how to automate the running of scripts in a specified order, as in a data analysis pipeline, we use and teach the tool GNU Make. Many R and Python-specific tools exist to accomplish this task (e.g., drake, snakemake, etc.) but we have chosen GNU Make because it is language agnostic (it can incorporate scripts written in any programming language), it is a good introduction-level tool for pipeline automation, and it is a tool currently used in industry. Furthermore, alumni have reported that learning GNU Make in MDS has facilitated their self-learning on more advanced pipeline automation tools after MDS, such as Apache Airflow and Luigi. 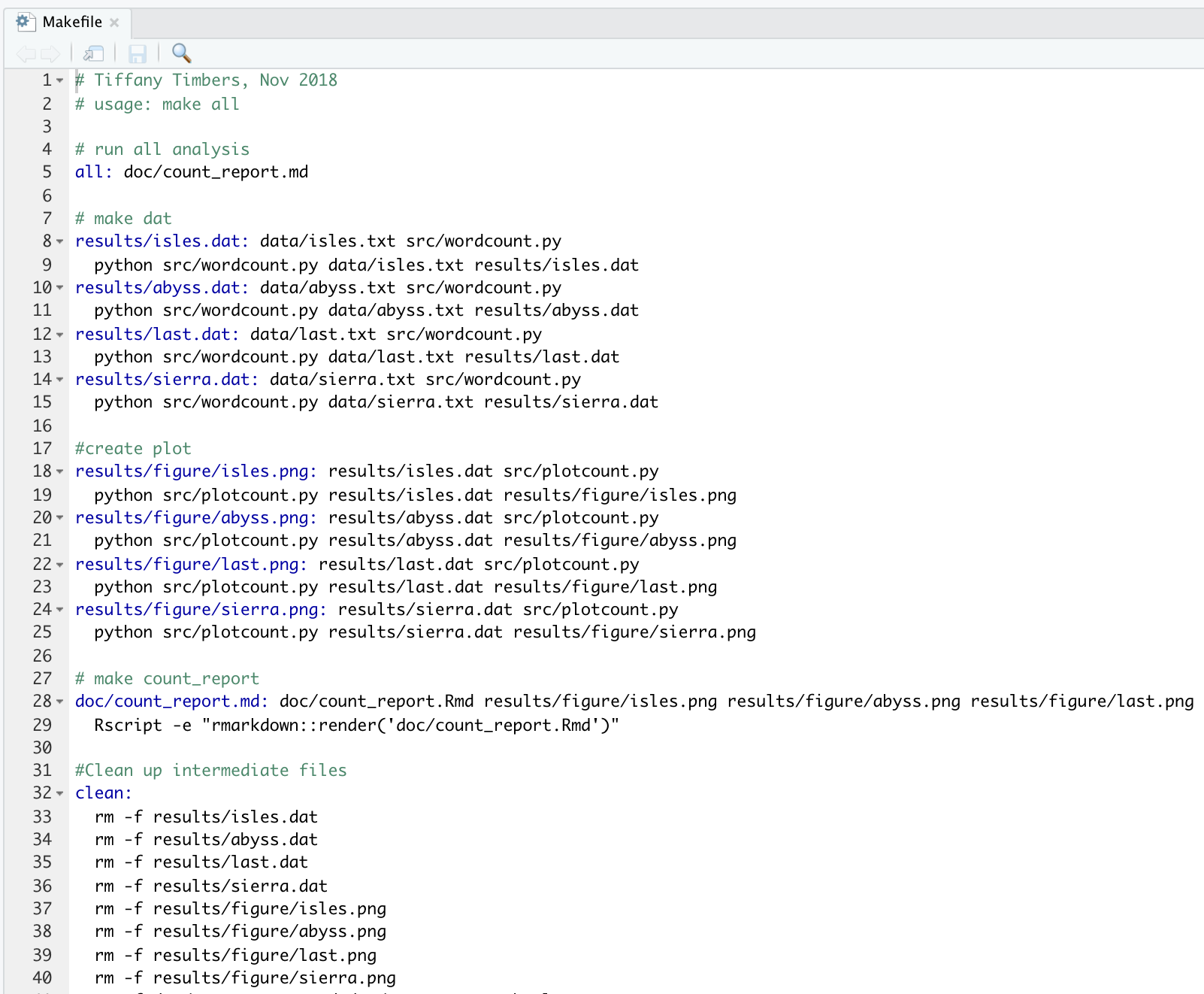 Figure 4. Example of a Makefile that has been written for the purpose of automating a data analysis pipeline.

In MDS, we teach the use of containers, such as Docker, to create reproducible, sharable and shippable compute environments for data analysis projects. Like GNU Make, Docker is language agnostic, working with both R & Python (in contrast to other language specific tools like packrat and virtualenv) and is also heavily used in industry. Additionally, Docker has added advantages in remote computing compared to using a tool like conda alone (which also works with R & Python), and thus learning Docker has several additional advantages. 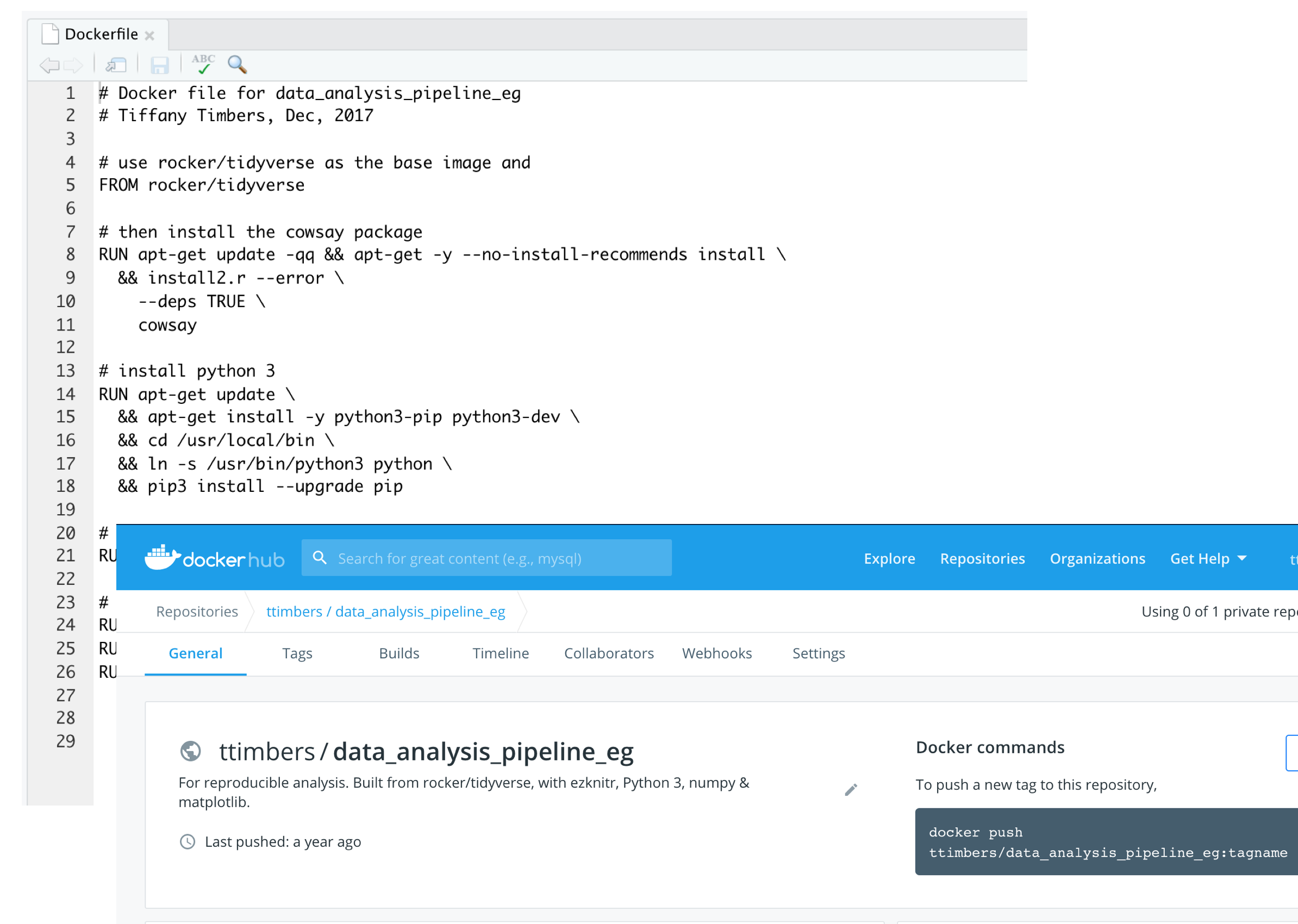 Figure 5. Example of a Dockerfile and the resultant Docker image on Docker Hub, which can be used for creating a reproducible, sharable and shippable compute environments for a data analysis project.

Finally, to teach creating interactive data visualizations and dashboards in R and Python, we choose the tool plotly Dash as it is now (as of 2019) compatible with both R and Python. Our choice for plotly Dash is again built upon the same rationale as previously mentioned tools: to minimize the extraneous cognitive load of learning different systems for different languages. By focusing on the same dashboard tool, the framework and deployment challenges remain the same, and then students can just focus on the language differences. 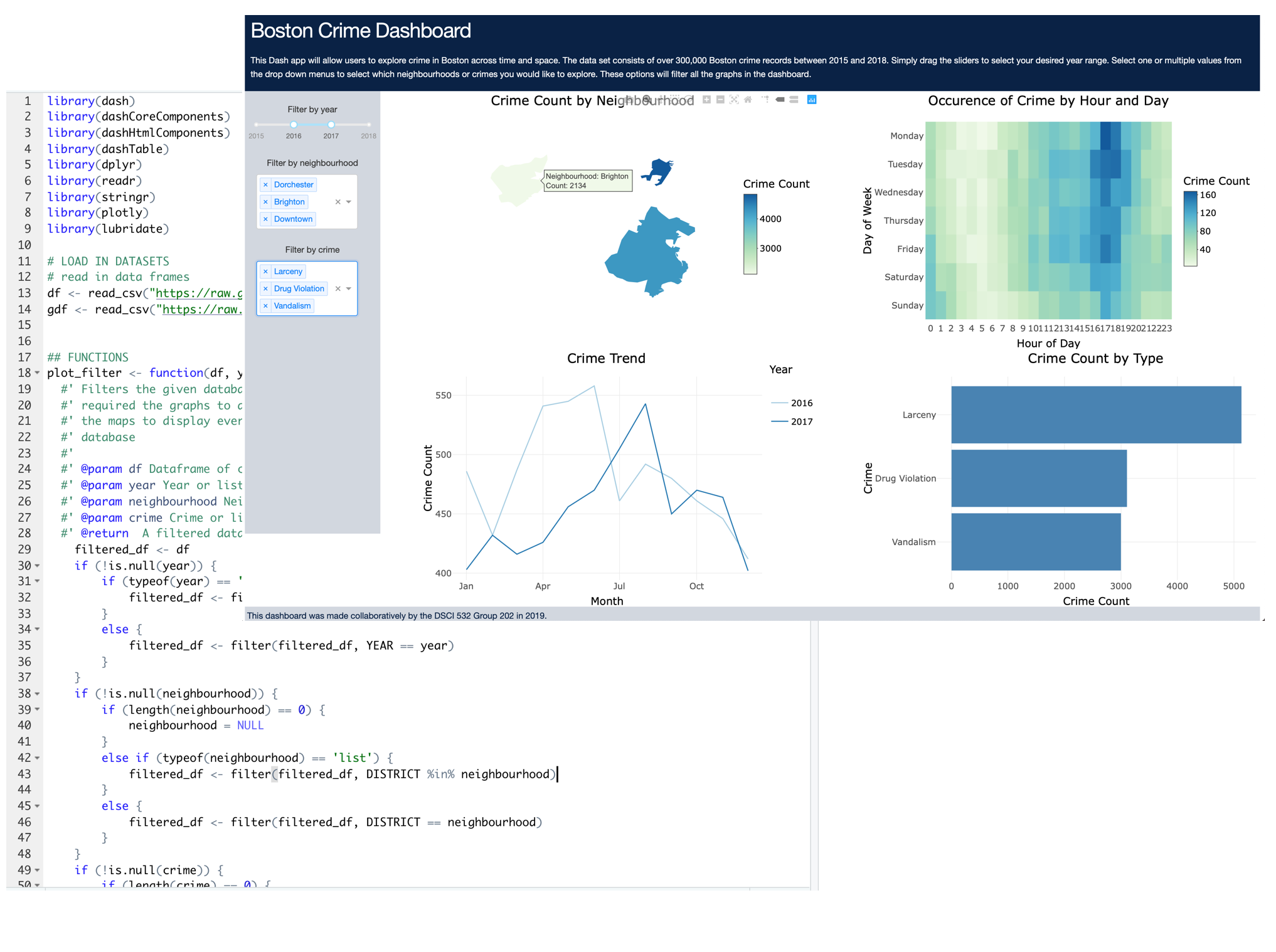 Teaching a data science program in two languages in 10-months does not come without its challenges. Below we list the top three challenges we have faced and discuss what we have done to try and address them.

Given the diverse backgrounds of our MDS students (which we see as a great strength of the program), our students begin MDS with mixed proficiencies of previously learnt R & Python programming skills. To be accepted into the MDS program, students must satisfy our computer science pre-requisite, which is successful completion of at least one university-level programming course. However, this pre-requisite course could have been taught using any programming language. Thus, although all our students have some foundational programming skills when they start MDS, some have never programmed in R, some have never programmed in Python, some have never programmed in either of these languages and some are proficient in both. This leads to some students needing more help at the beginning of the program to learn these languages, and to some students being “bored” because they already have experience and some level of proficiency in one or both languages.

The address this challenge we have taken a two-pronged approach. To support the more novice R and Python learners we provide coding questions that have immediate feedback (via visible code tests) and hints within MDS homework assignments. This has the added benefit of allowing us to auto-grade the questions using nbgrader (which works in both R & Python). In addition, we share external resources, such as the swirl R package, where students can get more practice (with automated feedback) to further solidify and strengthen their skills. To support and motivate the more experienced R and Python learners we include more advanced optional questions in our MDS homework assignments to challenge them and help improve their programming skills even further.

When learning two programming languages concurrently, students are faced with dual task interference. Dual task interference is defined as a decrease in the performance of a task when people try to do two things at the same time. In the MDS program, this can happen as they learn the R and Python programming languages at the same time. When learning R & Python concurrently it is easy to mix up aspects of the languages, such as which language counts from 0 versus 1, which uses the type() versus typeof() function for checking types, which language uses strict versus lazy evaluation when evaluating function arguments, and so on.

Memory decay during breaks in practice

As with any memory—both experiences and learned skills—without activation via recall and/or practice there is decay in the strength of that memory over time. We witnessed our students experiencing this in the first offering of the program, in the context of their ability to program in Python; there was a block of courses midway through the program where the students were required to use R for all the courses and thus had no requirement to practice Python. In the following block, when they had courses that required them to use Python again, a lot of students struggled. They were able to complete the homework, but they reported that they had a hard time remembering some of the things they had recently learned in Python, and that it took them longer to complete the Python homework at the beginning of that block.

Therefore, since then we have worked hard to keep improving the balance of the languages across all blocks of the program. We now include at least one course in each language every block. This ensures that there is some amount of consistent practice on both languages for the duration of the entire program. This has the added benefit that when students take on their first job after completing the program, they have had 8 months of practice in both R and Python and are thus primed to start work in either language, not needing time from their new employer to “get back up to speed” on R or Python.

Over the last 4 years we have experimented and observed our teaching practices and student learning in a data science program that teaches both R & Python. We believe that teaching the two leading languages used in industry and academia for data analysis provides our students with a competitive edge and more opportunities once they graduate from MDS and search for their first data science job. However, we also believe that, when integrating R & Python into a data science program, care and conscientiousness must be taken to do this successfully. We end here with our top four recommendations for those who are considering doing incorporating both languages into their data science programs:

Tiffany Timbers is Option Co-Director of the MDS Vancouver program and an Instructor in the UBC Department of Statistics.

I would like to acknowledge all the other Master of Data Science core teaching team members (current and past) and the MDS founders who have all helped shape our vision of how to effectively integrate the teaching of R & Python into the MDS program. I would also like to acknowledge Ian Flores Siaca, an MDS alum who contributed helpful and insightful feedback and discussion for this blog post.